Born and raised in Fresno, CA, taisha paggett is an interdisciplinary dance artist whose individual and collaborative works re-articulate and collide specific western choreographic practices with the politics of daily life so to contemplate and interrupt fixed histories of Black and queer embodiment, desire, placemaking, possibility and survival. Recent works include the dance company project, WXPT (we are the paper, we are the trees) and the collaborative School for the Movement of the Technicolo(u)r People, both of which also draw upon inquiries inside of social practice; critical pedagogy; somatic and contemplative investigation; queer, feminist and Black studies; performance and visual art studies; as well as the political and philosophical meshes of personal history.

From 2005-13 paggett co-instigated the LA-based dance project and discursive platform, itch. In 2014 paggett was featured in Velvetpark magazine’s “25 most significant queer women of the year” list, and in 2017 was one of ten “womyn, and womyn-led community arts organizations” honored with an Avest Award for their “outstanding contribution to arts in Southern California.” paggett was recipient of the Foundation for Contemporary Arts’ honorable Merce Cunningham Award in 2019.

As a dancer, paggett has performed, toured with and made significant creative contributions to many choreographers, artists and performance projects over the years including that of Every House Has a Door, David Roussève/REALITY, Victoria Marks, Mike Kelley, Stanley Love Performance Group, Kelly Nipper, Meg Wolfe and Yael Davids; She’s also held a longstanding collaborative praxis with visual artist, Ashley Hunt, titled On movement, thought and politics. paggett joined the UCR Dance Dept in 2014 and is a founding member of the Blackness Unbound collective on campus. 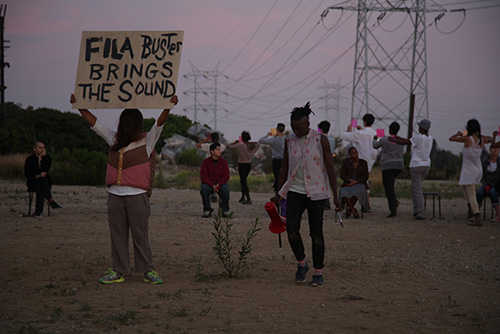