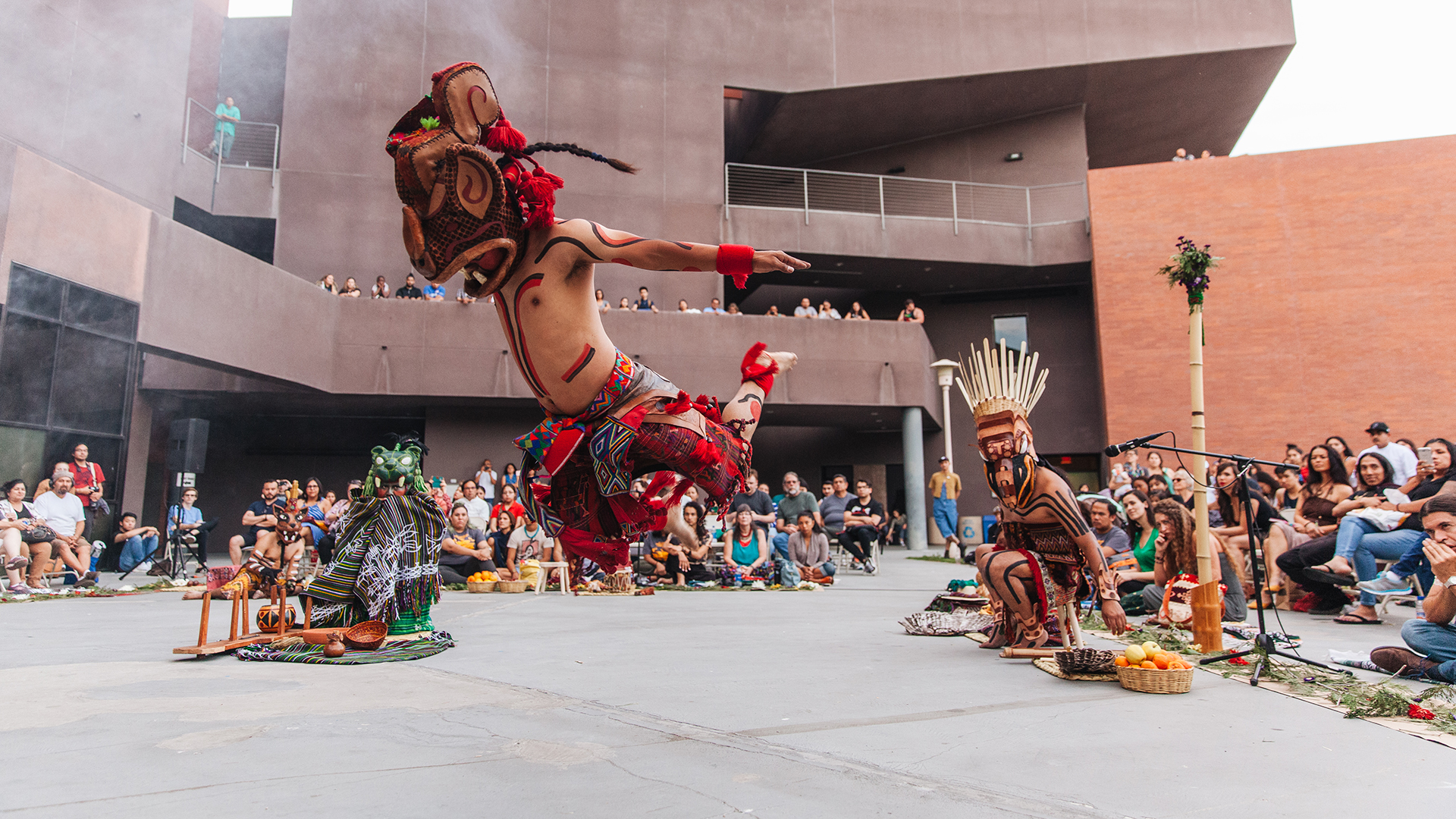 ARTS Building
Newly built in 2001, the ARTS Building is home to UC Riverside’s growing visual and performing arts programs. Serving as a physical and symbolic gateway between the community and UCR campus, the building is home to the departments of Dance, Music, Theatre, Art History, and Studio Art . It includes dance studios, music rehearsal and screening rooms, performance spaces, a photographic and film shooting studio, painting and sculpture studios, computer laboratories, and an arts library. The building’s design of stucco, brick, glass and steel structure, with angular features, ramps, stairs and ziggurat-like appearance, won the Los Angeles chapter of the American Institute of Architects’ Unbuilt Project Merit Award in 1994. 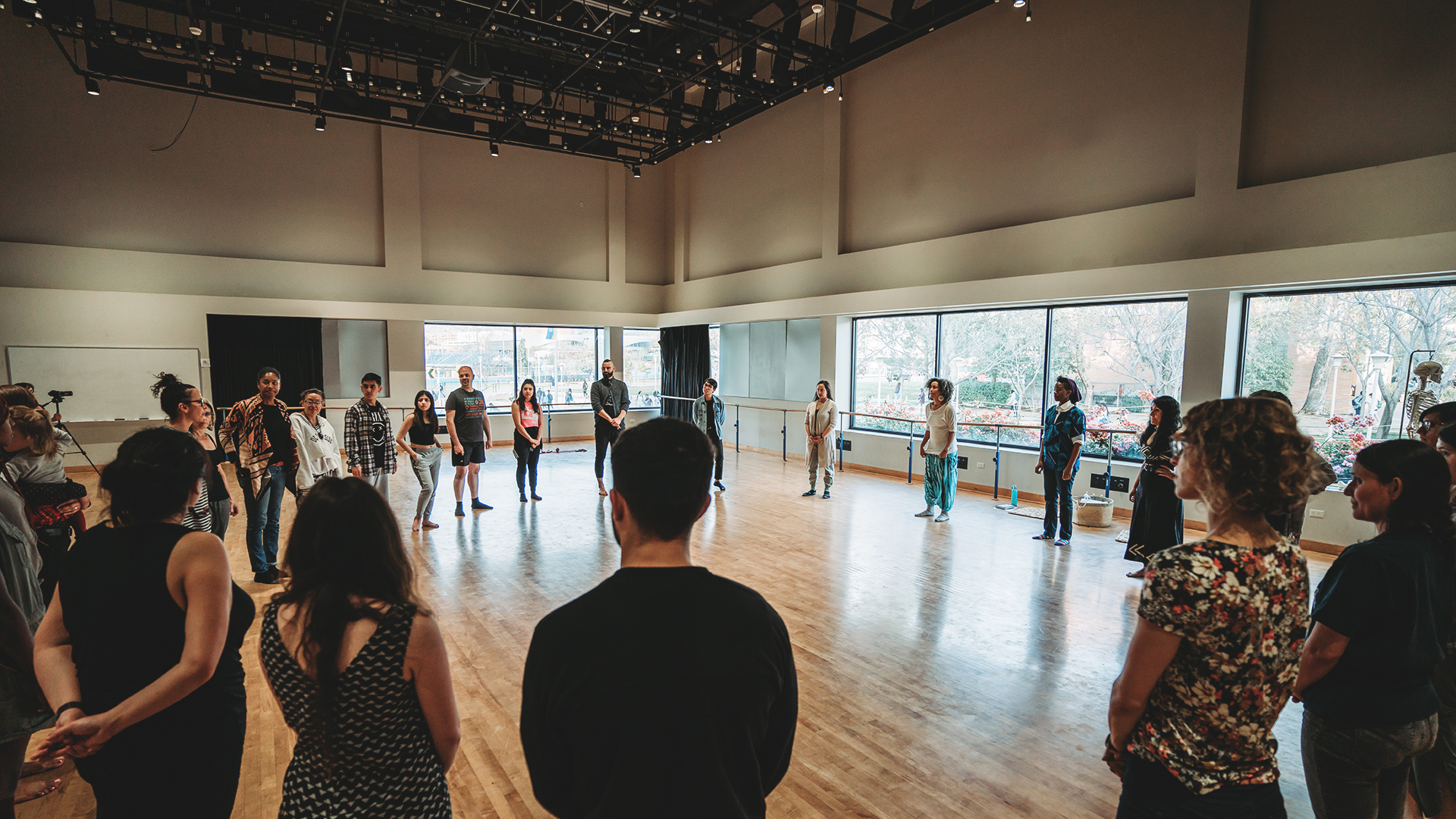 Large Dance Studio (ARTS 100)
ARTS 100, located in the ARTS Building, is the premier dance studio on campus. Primarily used for modern and ballet technique classes, composition, and rehearsal space, it may also be reconfigured for lectures and other movement classes. It is equipped with maple sprung floor, full-length mirrors, retractable curtains, barres, and audio and lighting capabilities. The studio receives plenty of natural light through its many windows, which fronts the promenade from Canyon Crest Avenue to the College of Humanities, Arts, and Social Sciences Building. (Photo Credit: Tanner Sebastian) 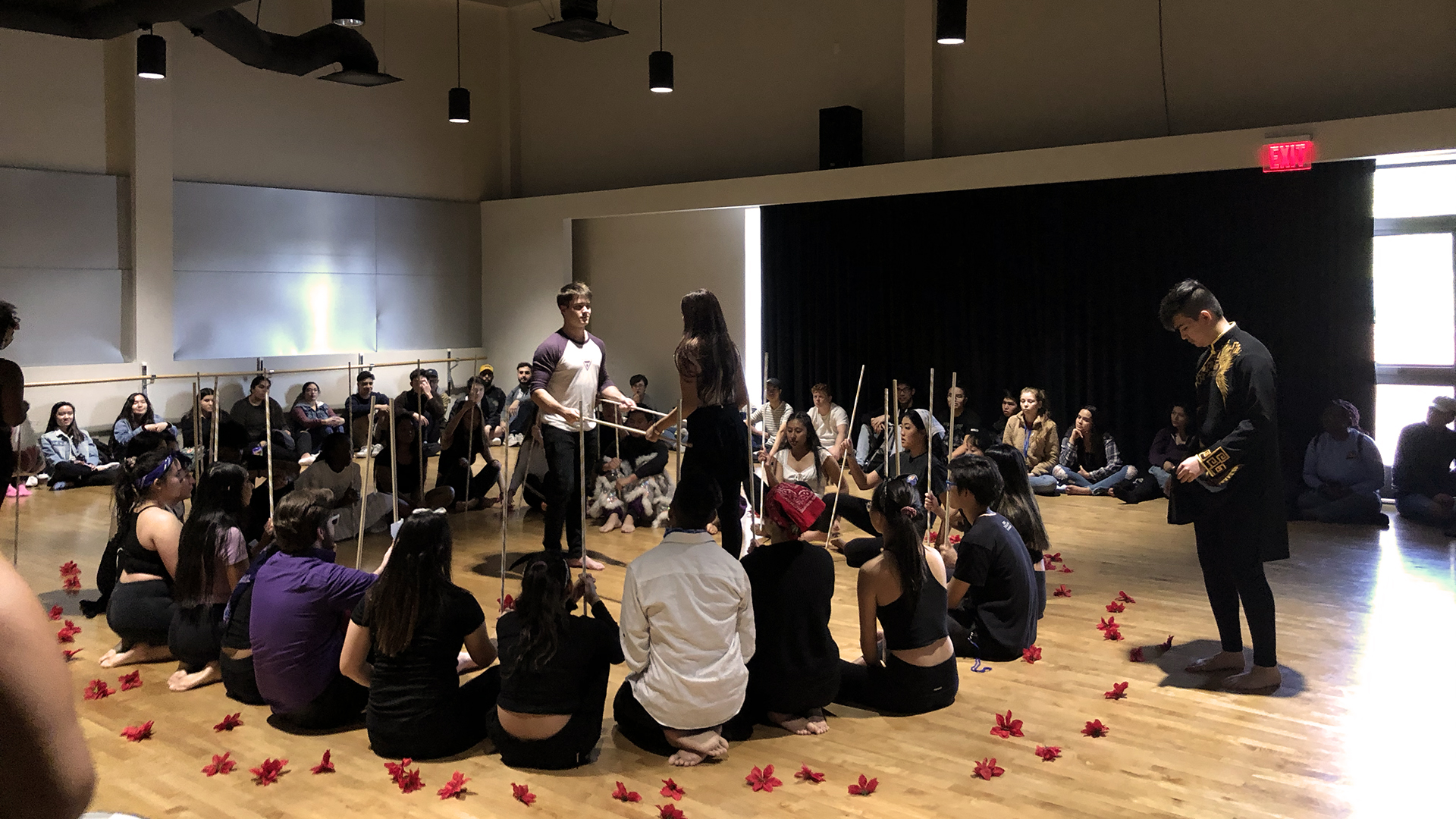 MaryLu Clayton Rosenthal Dance Studio (ARTS 300)
The MaryLu Clayton Rosenthal Dance Studio (ARTS 300), located in the ARTS Building, is also primarily used for modern and ballet technique classes, composition, and rehearsal space. Smaller than ARTS 100, the studio is also equipped with maple sprung floor, full-length mirrors, retractable curtains, barres, and audio and lighting capabilities. Located on the third level of the ARTS Building, it receives plenty of natural light through its windows and glass doors, which may open out to the Dance Patio, an outdoor space. The studio has magnificent views of Box Springs Mountain. (Photo Credit: Joel Smith) 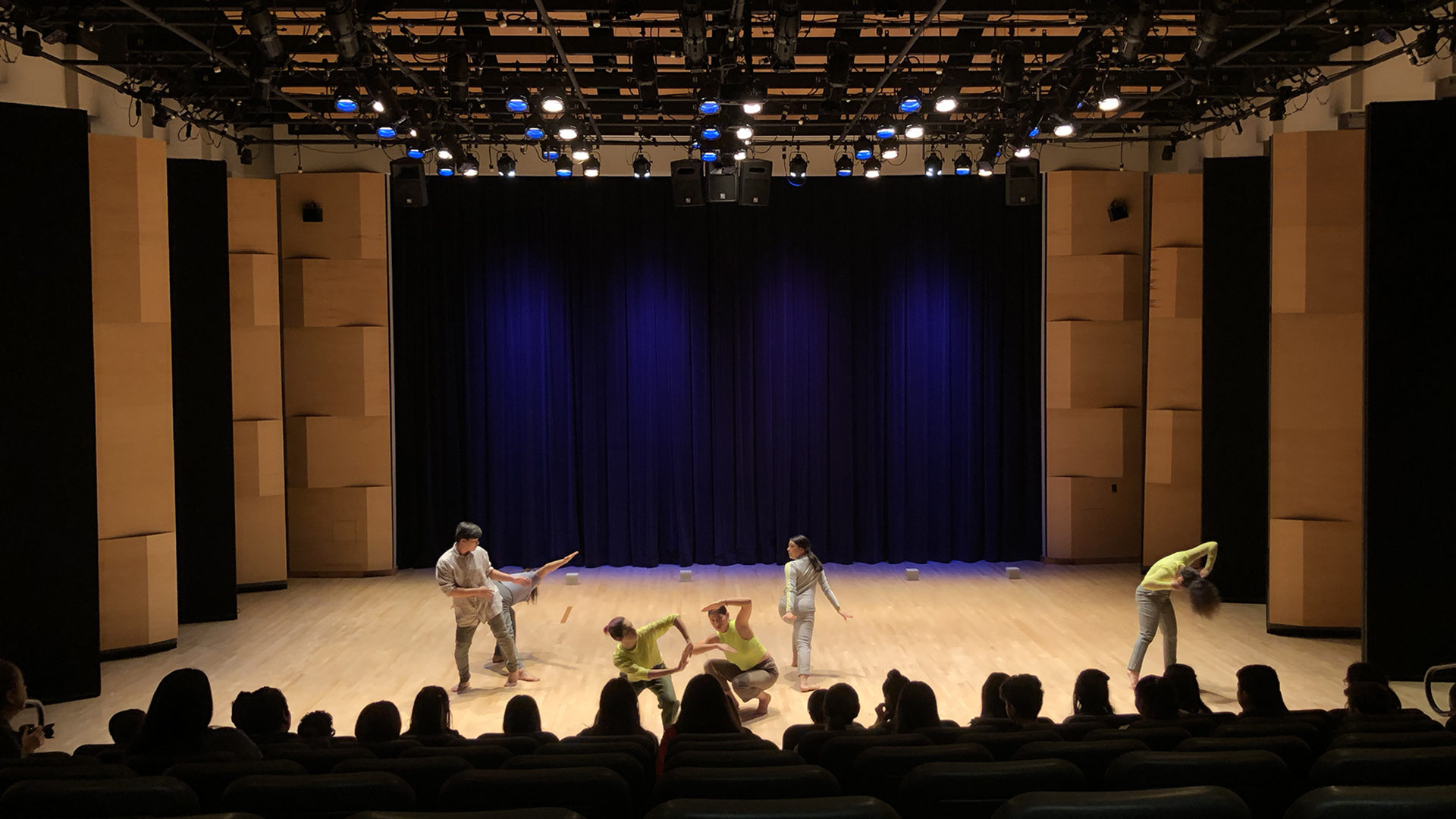 ARTS Performance Lab
The ARTS Performance Lab (ARTS 166), located in the ARTS Building, is a multipurpose space and research venue. The space offers infinite configuration possibilities to suit different types of events and performances. It also offers the luxury to open out to an outdoor area, increasing even more the possibilities for different types of programming. The Performance Lab is equipped with an ETC dimmer system, a full compliment of ETC lighting instruments, a full sound system, maple sprung floors, and seating for 140 on a fully retractable seating system. (Photo Credit: Joel Smith) 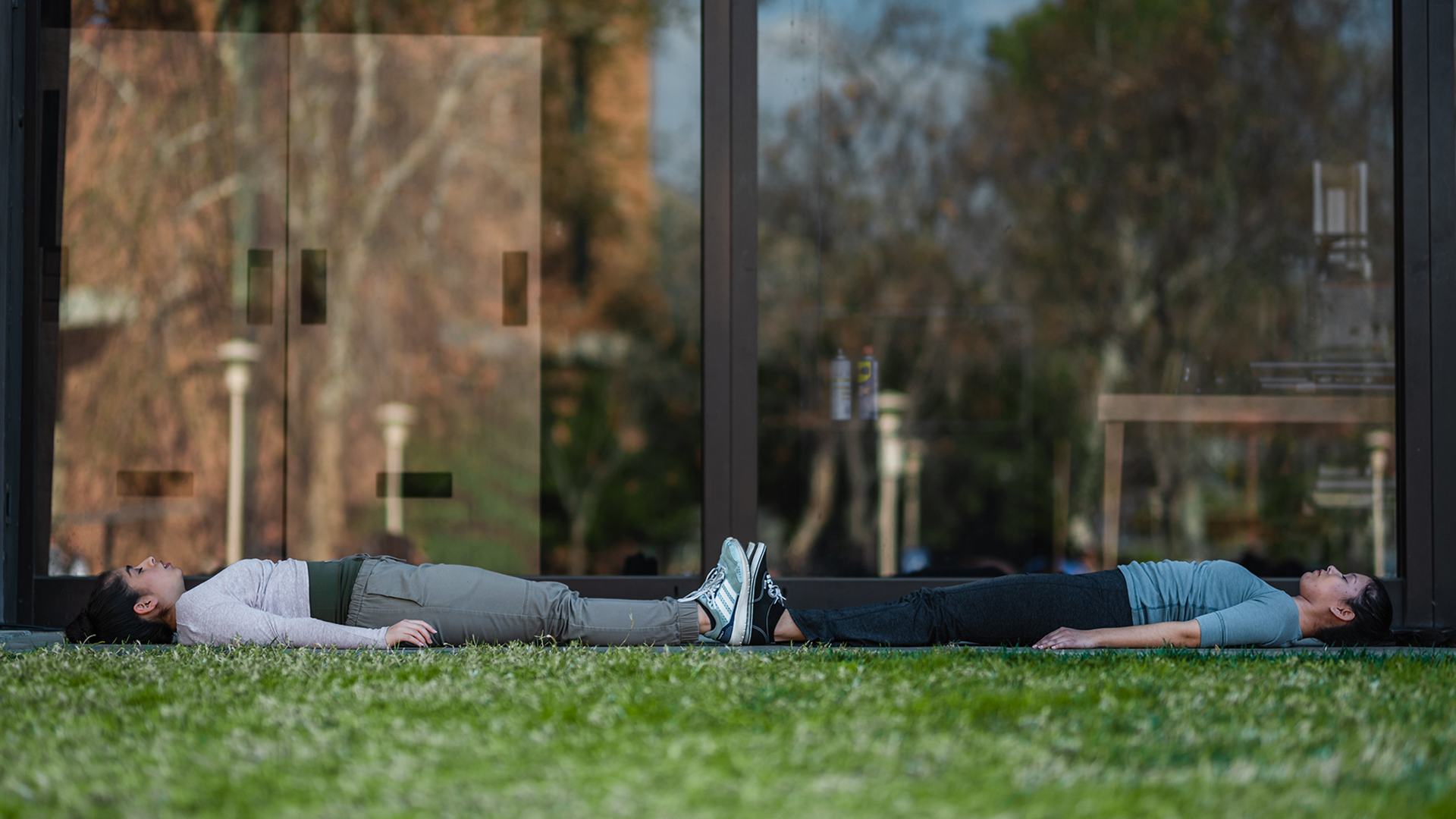 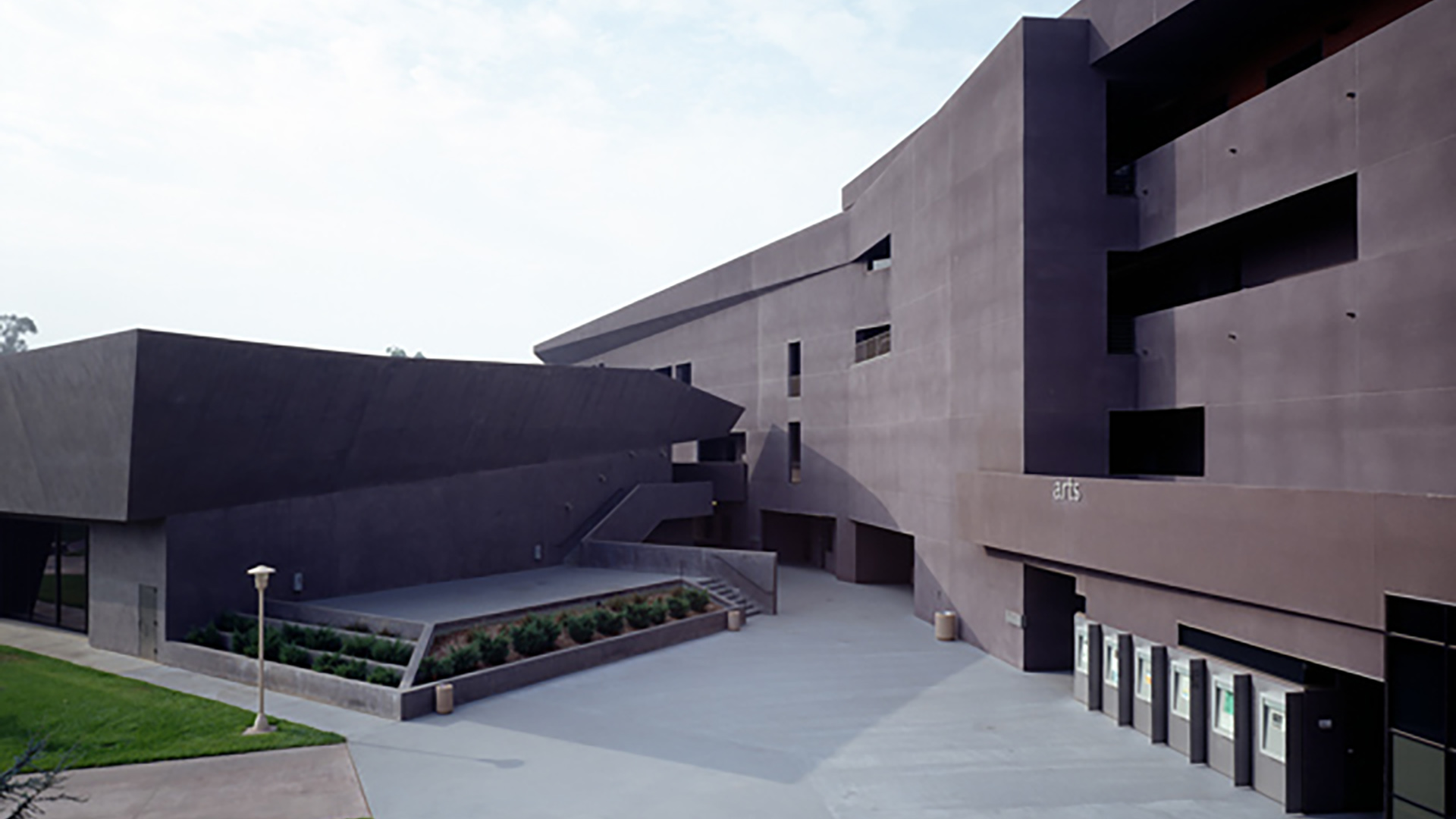 ARTS Outdoors Stage
The Departments of Dance, Music, Theatre, History of Art, and Studio Art share the Outdoors Stage, located on the first level of the ARTS Building. It is primarily used for lectures, installations, and arts outreach events for the community. Because it is made of concrete, dance students limit their use of the Outdoors Stage. 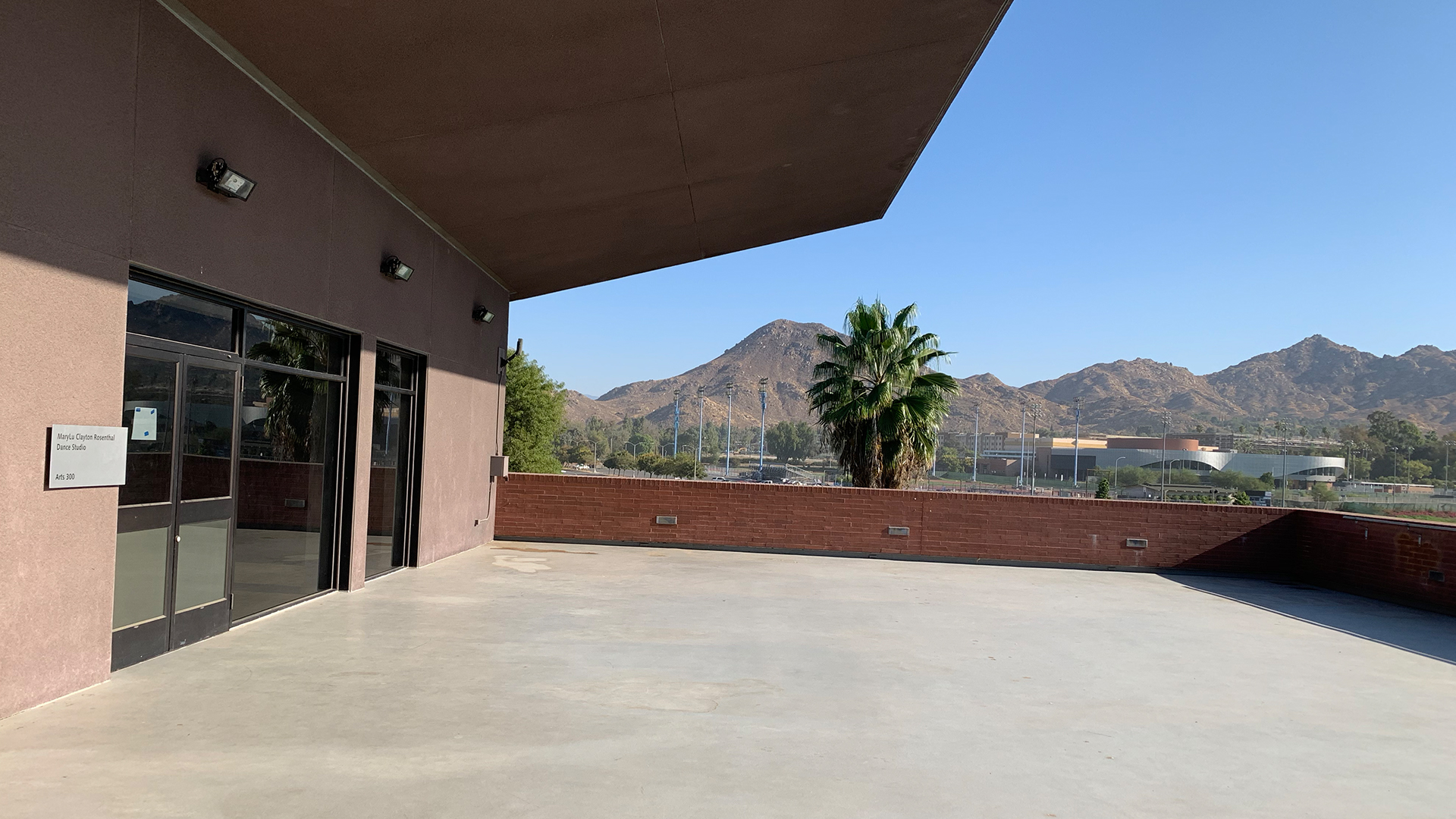 ARTS Dance Patio
The Dance Patio, located on the third level of the Arts Building, is the outdoor extension of Arts 300. It is primarily used for lectures, performances, and receptions, and has stunning views of the campus. 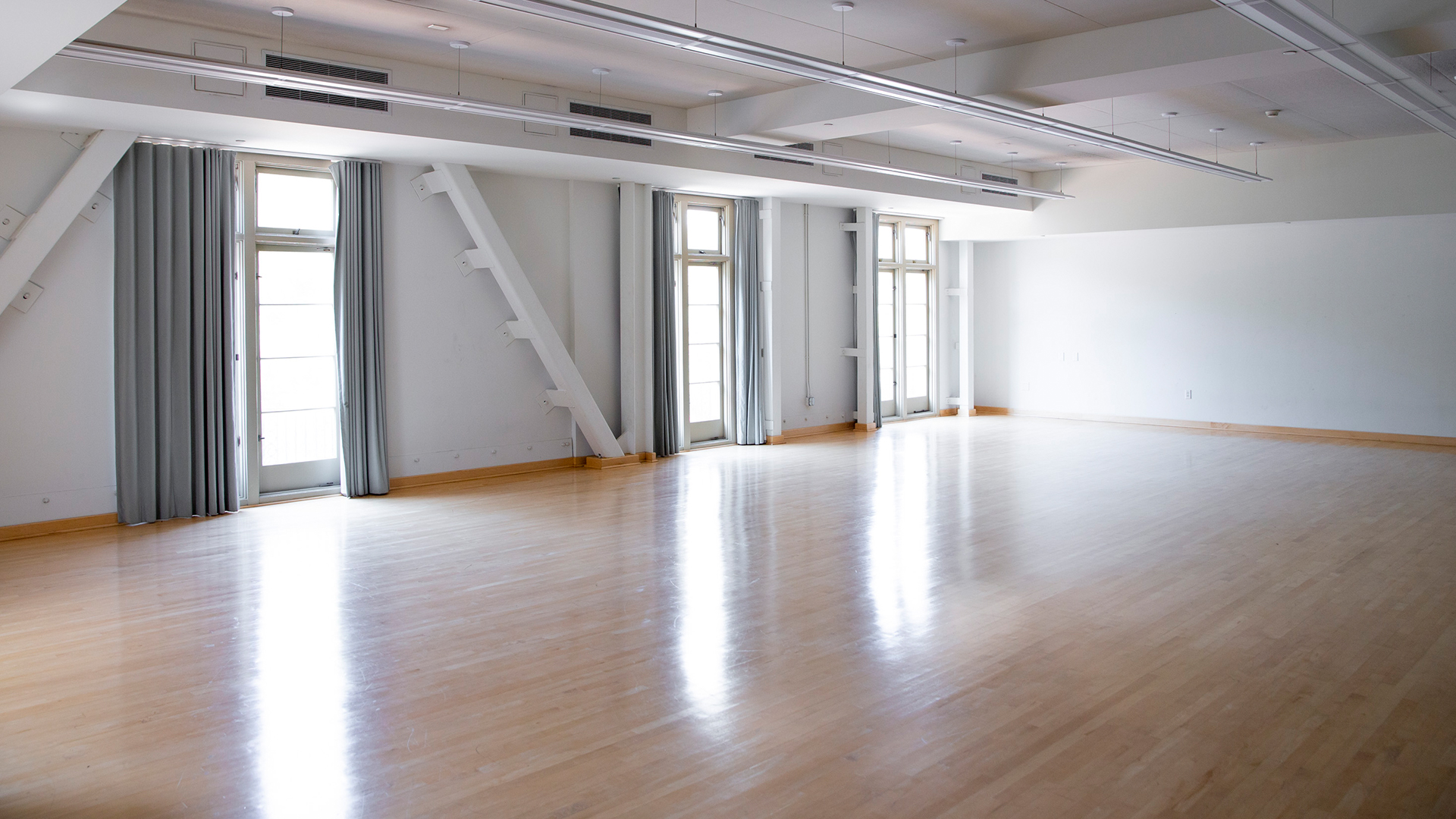 Brithinee Dance Studio at Culver
The Barbara and Art Culver Center for the Arts in downtown Riverside houses two dance studios, one of which is dedicated for use by the Department of Dance. It features a wooden floor, mirrors, and tall windows that overlook the Main Street pedestrian walkway. 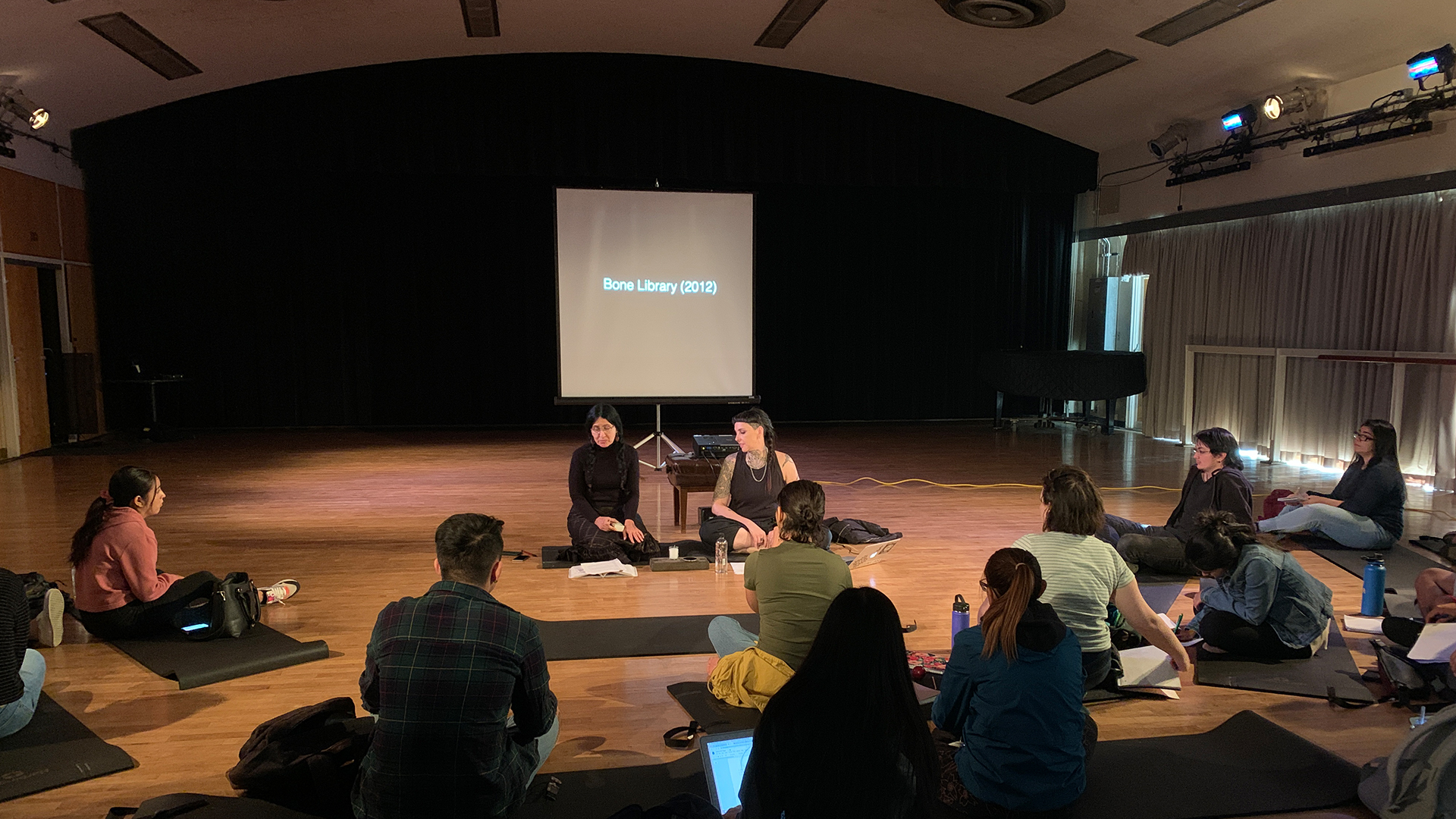 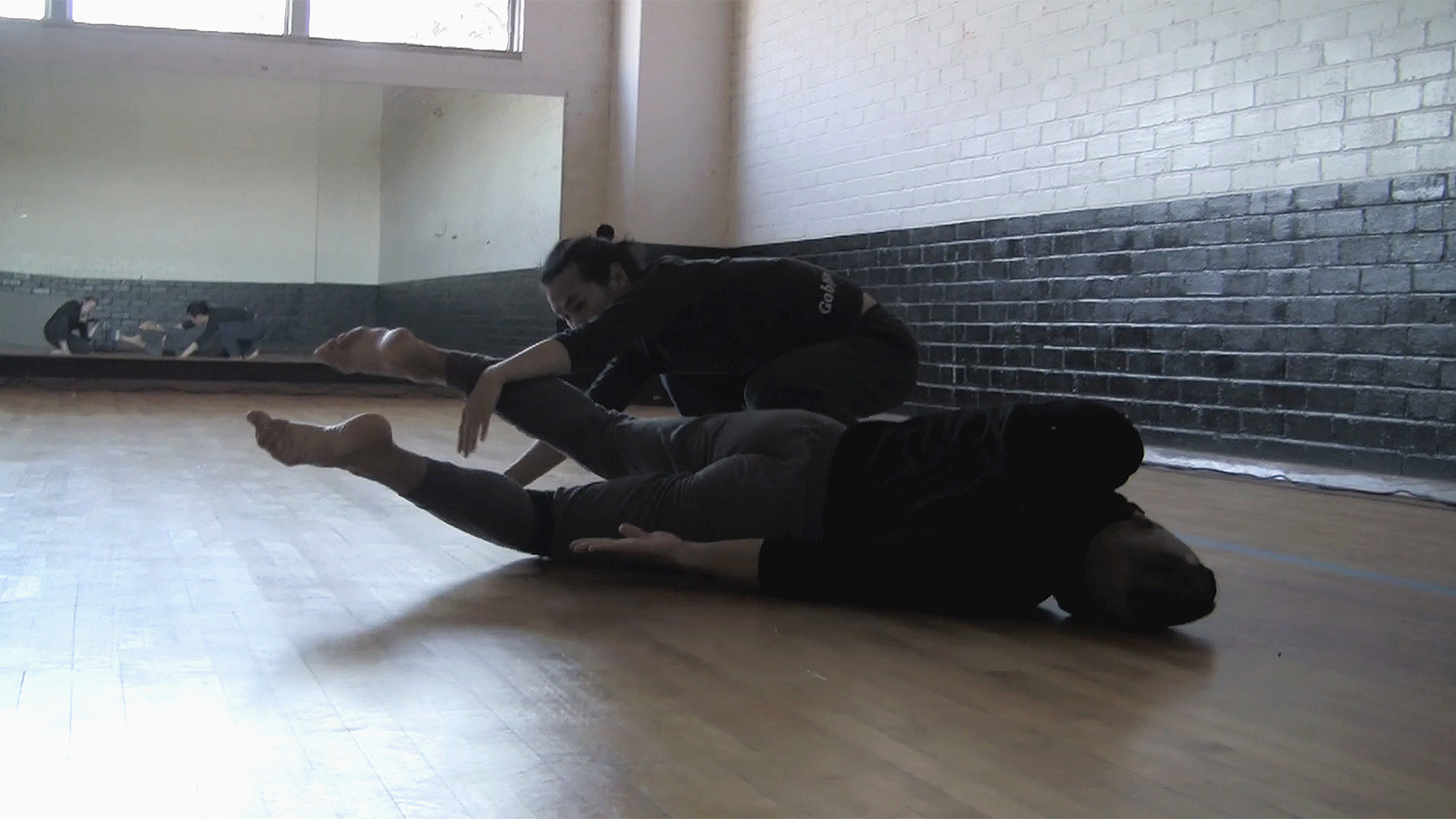 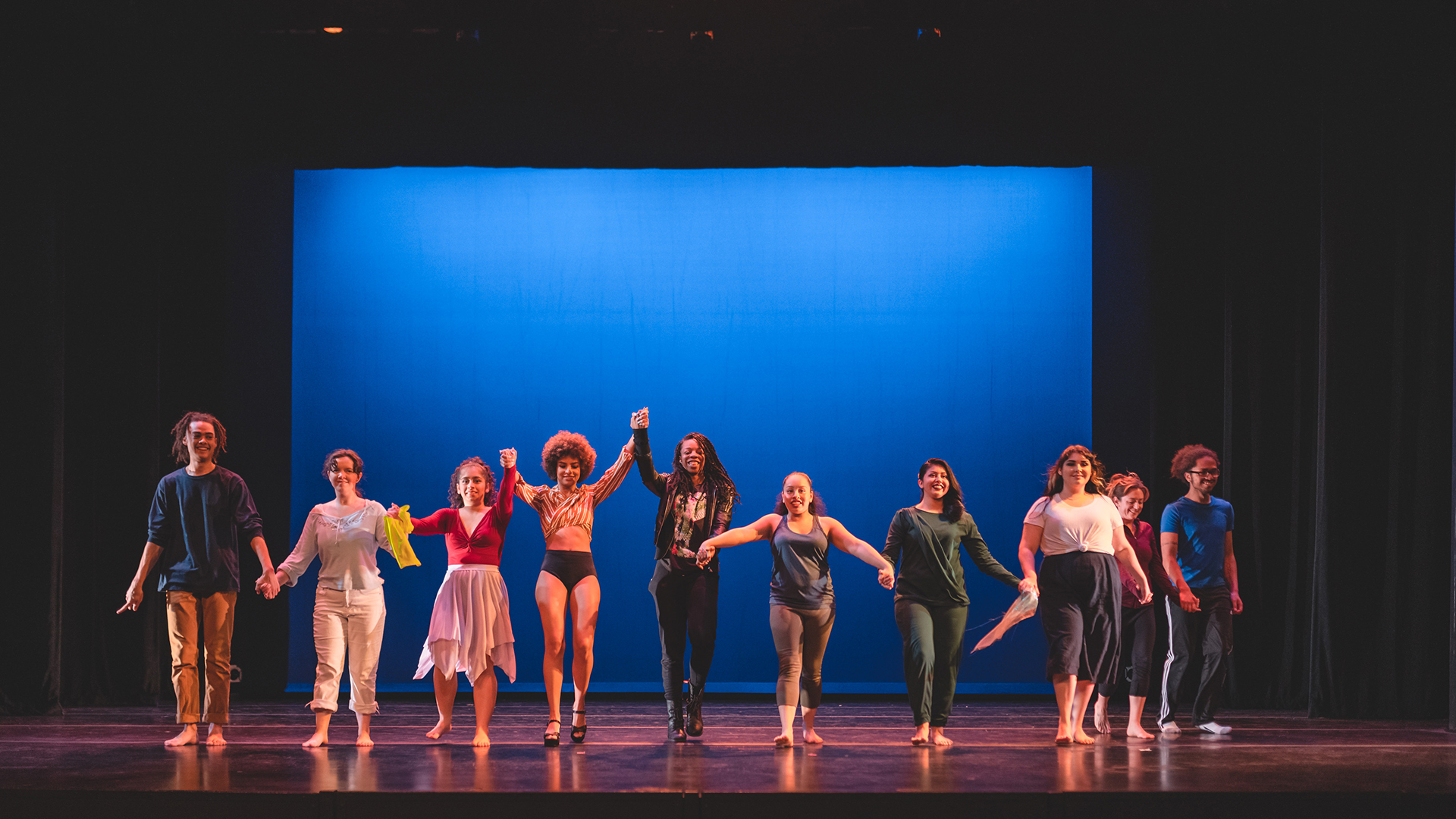 University Theatre
Located on the south side of the campus, the 484-seat University Theatre is the largest formal performing arts venue on campus. It is a fully equipped theatre with a wide-range of performance and presentation capabilities, including the annual dance production UCR is Dancing. The staff consists of professional theatrical technicians, administrative support, and a large pool of UCR students. The staff is committed to the highest standards of performing arts excellence and to insure that audiences and artists have a gratifying experience when they come to the University Theatre. 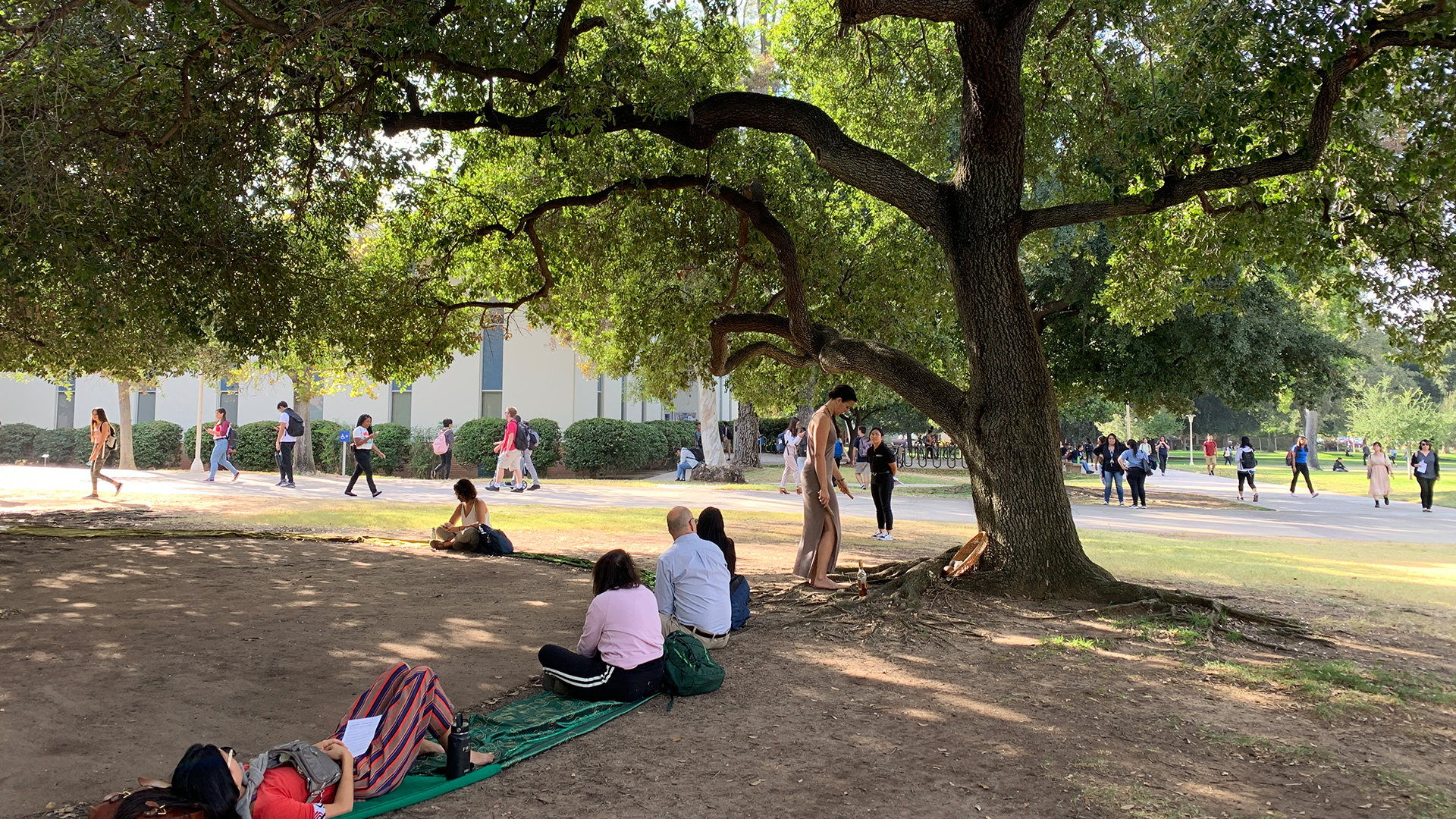 Site-specific locations
UC Riverside also has numerous locations in and around campus that are conducive to site specific work, such as other areas of the ARTS Building, the Humanities, Arts and Social Sciences Building, the Engineering Building, the Science Library, the Tomas Rivera Library, the Belltower, as well as spaces in downtown Riverside, to name just a few. 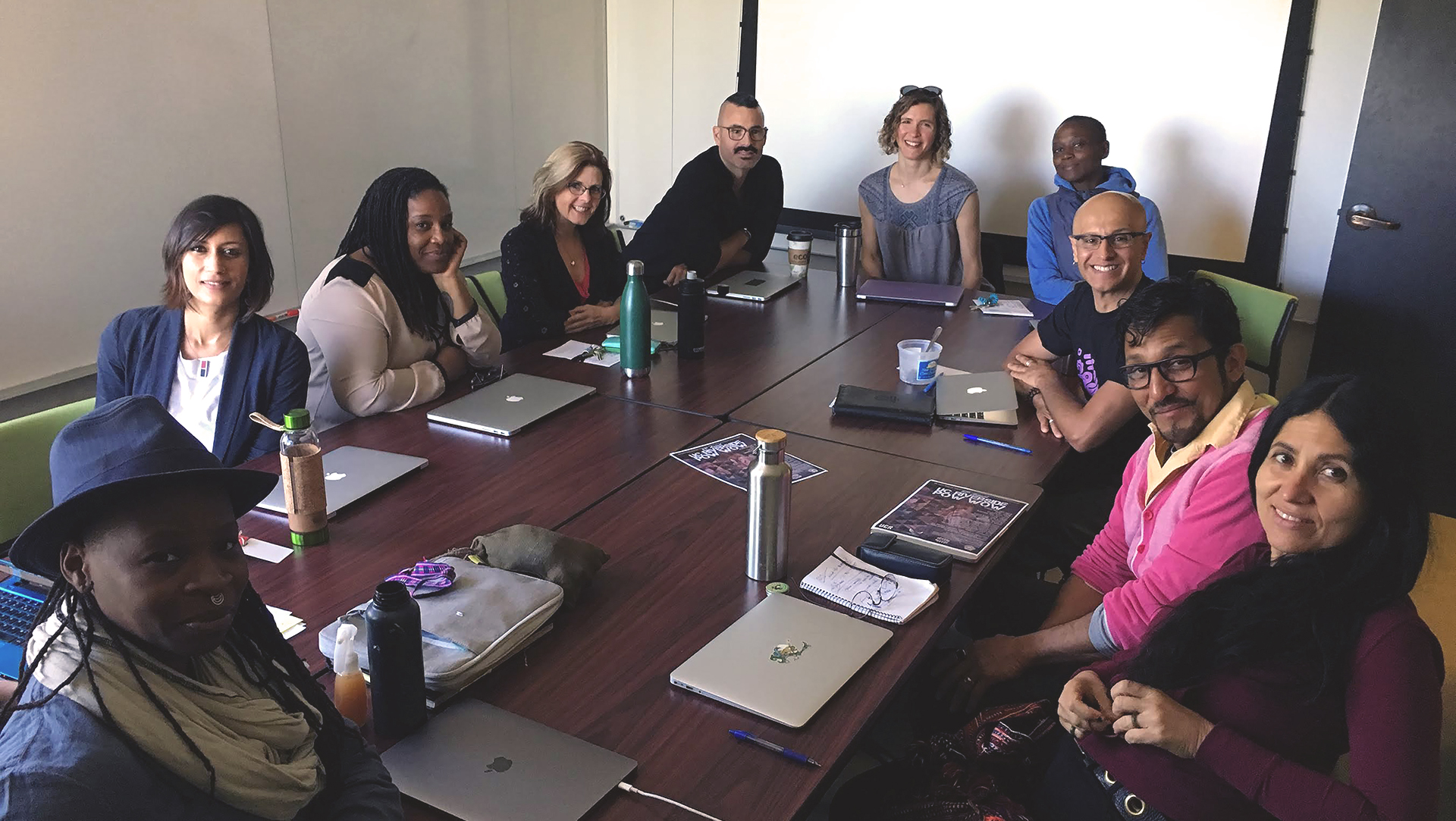 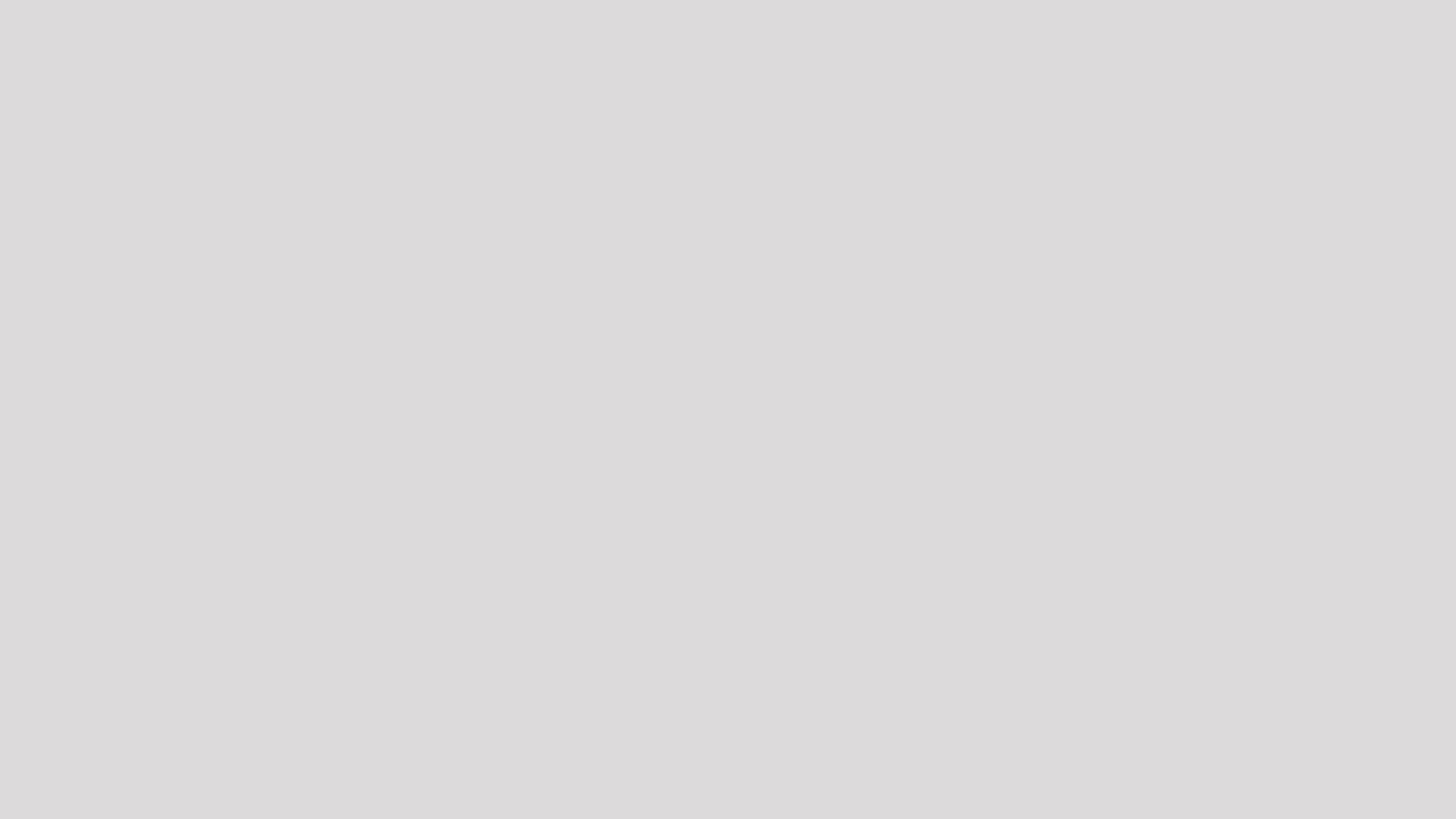 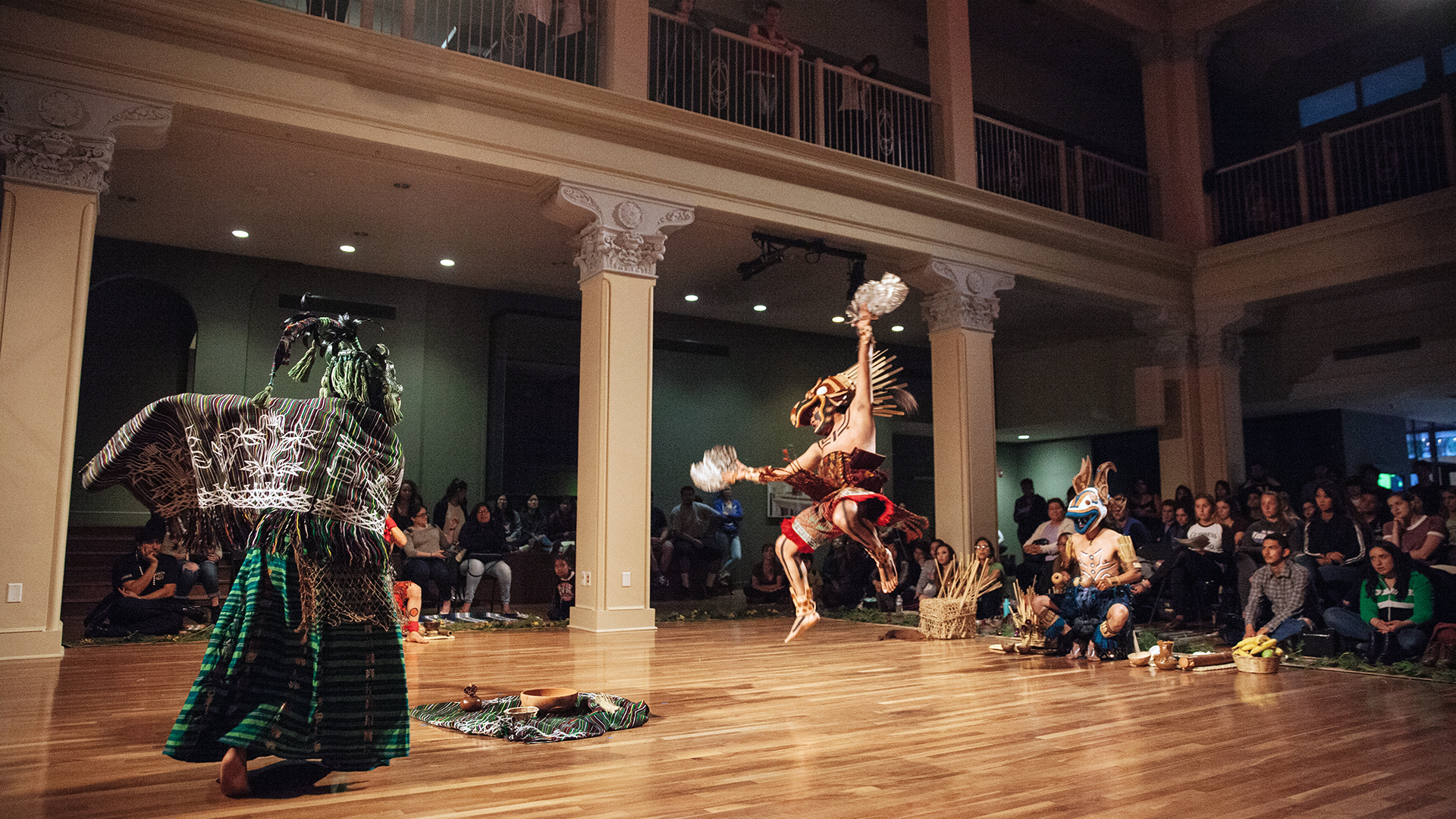 Coil Brothers Atrium
The Coil Brothers Atrium in the Barbara and Art Culver Center of the Arts is a magnificent space with a beautiful 35 foot high naturally illuminated clerestory monitor in the center. It is used for conferences, lectures, meetings, awards ceremonies, social gatherings, and performances. (Photo Credit: Jonathan Godoy)